If you run into a CFGA member, you’ve probably heard them saying that pheasants are in our DNA and we’d be lying if we didn’t say that pheasants are the life blood of our organization’s conservation efforts. In fact, pheasants are CFGA’s legacy – a testament to our club’s effectiveness in introducing and sustaining this game bird population throughout southern Alberta.

Becoming a member of the CFGA’s Pheasant Committee is an exciting part of what we offer to volunteers, but with this rewarding opportunity, comes a lot of responsibility, so there are a few qualifying criteria before members are able to participate in this program.

If you’re interested in joining CFGA’s pheasant committee, please reach out to the current Pheasant Chair to see if it’s a fit for you. 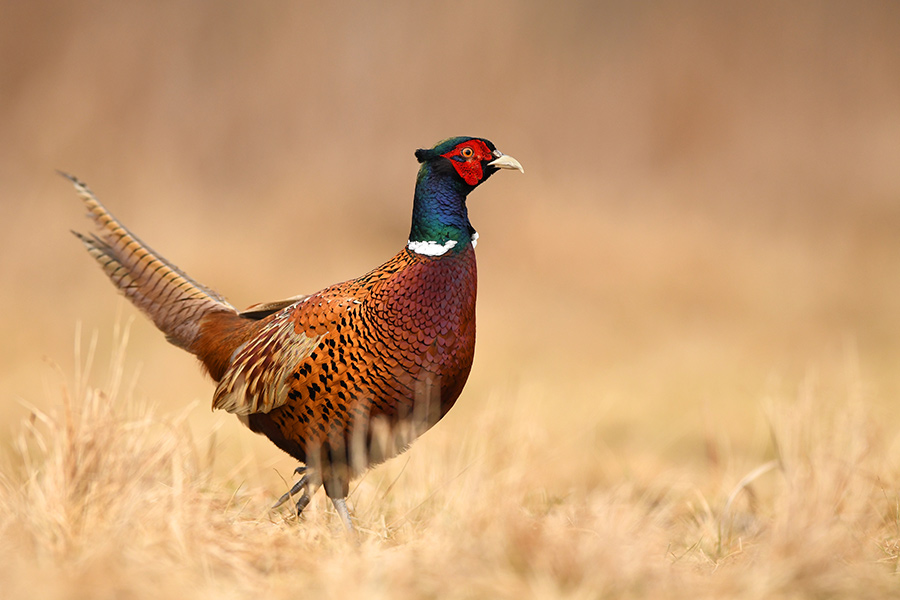 The ring-necked pheasant (Phasianus colchicus) is not native to Alberta, or North America for that matter, but the birds have become an important part of our eco-system. Native to the plains of the Ukraine, Siberian steppes and northern China, the ring-necked pheasant is a hardy bird, capable of withstanding southern Alberta’s harsh winters, which make it a natural fit for our challenging climate.

Males of the species are beloved by sport shooters and photographers alike for their vibrant colours and long, tapered tails which make them easily identifiable, while the females are a mottled brown and blend into the underbrush and grasslands of Alberta. The birds favor a habitat that consist of thick brush, bordering wide open fields, where they can take advantage of their land speed, as well as their ability to fly to evade predators.

What is the pheasant committee and what does it do?

The pheasant committee is a group of our member volunteers that take part in our pheasant raise and release program on an annual basis. It’s not a requirement for our members to participate in the program, but volunteering for CFGA’s pheasant committee is a challenging and rewarding experience unlike any other that our club offers. Veterans work alongside newcomers to teach them how to care for these majestic birds, through the various stages of their lifecycle.

As a pheasant committee member, you’re not just looking after birds, you’re a custodian of Alberta’s wildlife heritage – preserving a 100+ year old tradition of maintaining pheasant populations throughout the province.

The Process: A Photographic Journey

Physically raising the birds is seasonal, but the winter months after release are spent planning for the following season, making our raise and release project CFGA’s most important year-round program.

We receive 1,000 birds in cardboard crates similar like the ones pictured below. The birds at this stage are very vulnerable and require delicate handling. It is critical to introduce each and every pheasant chick to water for their very first time – talk about a completely unique and rewarding experience!

The Next Six Weeks:

The pheasants remain in their enclosed brooders, equipped with heat lamps, waterers, feeders and plenty of straw to keep them warm and safe. Even our veteran members remain amazed at how quickly the birds develop and grow from one week to the next!

“As Photo Chair in 2018, I was responsible for documenting the development of the birds, not only for our club’s records, but for the ACA. It was really interesting to see the ‘personalities’ that emerged as the birds developed. Some of the birds were curious about my camera, while others were fearless warriors, coming to confront me with their soft beaks. The timid ones ran away to the dark corners of the brooders, but each and every bird captivated in their own way.” – Alex Whitcombe

Once the birds have matured to their required size, we release them from their brooders into our large pens via a specialized intermediate catch pen. The birds will then spend the better part of the next four months roaming this large enclosure, becoming acclimatized to the elements. Heavy netting prevents raptors such as hawks from entering the enclosure, but they’re never too far from the action.

Although the goal at this stage is to acclimatize the birds to real weather conditions, we maintain a steady source of food and water and ensure that there is adequate shelter from man – made structures, to the dense brush that would provide adult birds with cover in the wild.

Release day is exciting. Period. It’s the culmination of hard work, dedication and a commitment to the protection of these amazing birds and the pride can be felt in the air as members gather at the pens to round up the birds.
Go to Top